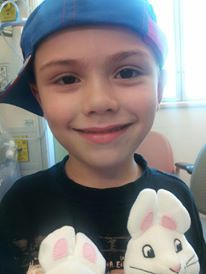 Our 6 year old son Tristen Nathaniel Silva was diagnosed in December of 2012 with Acute Lymphoblastic Leukemia (A.L.L.). To us, he was a miracle baby in every sense. After saving money & getting a line of credit, we had him by way of in-vitro-fertilization. After a failed first attempt, the 2nd one was successful, he was the perfect baby. Tristen has this unique & magical ability to gather people around him, to see & make him smile because it is so contagious. In his kindergarten class, he is the candle, every kid gravitates to him, on his hockey team, of all the 14 kids there, the one that all the parents played with other than their own was Tristen. If & when you meet him, you will see what I mean.

It was December 15th, at Tristen’s hockey game when we first started noticing signs that things just weren’t right. He was having a rather unusually hard time getting up after falling on the ice. He was looking rather pale in the dressing room & some of the other parents noticed it as well. On the Monday (16th), he began complaining of stomach pains. I figured it was due to constipation because he hadn’t gone in about 3 days. I called our family doctor & made an appointment for that day, but after Tristen went to the bathroom he felt fine. I decided to cancel the appointment as he looked perfectly normal, but soon after, the stomach pains returned late at night. The next day at school he labored to get through the school day. At this point we had enough & took him to a walk-in clinic as our family doctor was not open. Upon walking into the room, the doctor didn’t even assess him, he promptly ordered us to the Mississauga Trillium Pediatric ward. As soon as my wife walked in (I had to work) the nurse ordered him to emergency, and was quickly ushered into a room. After I was done work, I arrived at the hospital pretty much in time to hear the doctor deliver us the news that Tristen had a very serious blood disorder, that he was very sick, needed to get to sick kids IMMEDIATLEY and that we should prepare because we have a very big hill to climb with him. I can’t begin to explain how my stomach felt like it dropped out of my body. To make things worse, I was coming down with a cold & was not permitted to go to sick kids because I may infect other children. I stayed away for 4 days as my wife took on the lion’s share of getting suddenly educated, alone.

As soon as Tristen was admitted, (which was Wednesday the 18th) he was given a bone marrow extraction, lumbar puncture (spinal tap), 3 blood transfusions & his first dose of chemotherapy. We needed to wait to find out what we were dealing with. It was soon confirmed that our little boy had cancer, Leukemia to be exact. It was extremely painful for Tristen to undergo all of the poking & prodding, the lumbar puncture & bone marrow extraction, all the while putting the entire burden of trying to comfort Tristen on my wife’s shoulders. To compound things, Tristen was given a steroid which made him EXTREMELY angry & hungry. He needed to eat almost on the hour, as if he never ate. Things were starting to add up cost-wise as he wouldn’t quiet down unless he got the food he was asking for.

In January, we came awfully close to losing him, as he developed an extremely serious staph infection from his port insertion which was very difficult to fight as his immune system was compromised. It turned out that the infection was in his port line. This port line sat under his skin on his right chest & is the most convenient & painless way to administer his chemo as well as take blood. The doctors determined that it was a staph infection & needed to remove it surgically. This would mean putting a picc line into his arm, an option that can lead to many complications. It was a tough battle, because he had no immune system to fight the infection, and due to the removal of the port, he had a gaping hole opened on his chest. It was simply covered up with a dressing & changed every 3 days. After 13 days, they sent us home again, still requiring us to come in to sick kids 2 days a week. Additionally, we had a home care nurse which came every day to look at the dressing, flush out the picc line & administer the antibiotic though a portable IV he carried around with him like a knapsack. He has since recovered from the infection and now has another port in his chest, but bears the large visible scars on his chest from the ordeal.

He has undergone numerous phases in dealing with his cancer, many of which involved intense chemotherapy, more blood transfusions, more steroid treatments as well as lumbar punctures. Throughout all of the strenuous demands put on his body, he has always remained positive, patient and vigilant. It was very difficult for him as he was pulled from school as well as extra-curricular activities like hockey and swimming. This was compounded by the fact that it all took place the week before Christmas. What made it difficult for us was that he thought he did something wrong to get taken away from everything. The learning curve was not just for him, but very much us as well.

Tristen’s latest & longest phase is the MAINTENANCE PHASE, expected to now last 2 ½ years, provided there are not any setbacks, which we have been advised to expect. His protocol calls for chemo daily, weekly blood tests, steroids for 5 days straight monthly, antibiotics 2 times a day on weekends, a different strong chemo intravenously every 2 weeks and spinal lumbar punctures every 2 months. The prognosis is favourable, but one that demands that we make a complete overhaul in terms of how we live our daily lives here at home. Sterility & cleanliness have never been more important & imperative to practice & implement every day. Due to the massive amounts of chemo that he is undergoing, everything in terms of bed sheets & clothes become a very serious issue as his perspiration & / or urine all contain some chemo & we find ourselves washing quite a bit and separating his clothes from ours diligently . The cleanliness & attention to washing often has become paramount as a result of this. We also needed to remove carpeting in the house due to the discovery of mold, changed our furnace & added a special filter as his breathing became more sensitive, especially when he is neutropenic (dangerously low platelets in his blood rendering him with very low immune system). When he gets to these points he becomes super pale, very weak & lethargic, vomits quite a bit as well as needing to wear a mask over his mouth often.

I am self employed (professional musician), so I couldn’t miss any work, we never had the breathing room to absorb something like this. I worked through the entire time, never missing a day. Though I have no benefits, my wife does though not a full coverage of all medicines. The chemo drug he is presently on now came out to $300, & before that one was $229 – all after my wife’s coverage. I am doing my best to manage all the costs of the food, drugs, parking & other essentials, especially since my wife was off work, only getting a fraction of her regular paycheque. Her insurance covered her for 6 months as she then returned to work. It has been trying to say the least as Tristen’s grandfather passed away in June, so this just added up to having a very hard time to adjust to everyday activities. It is a bit of a tough spot because she can’t lose her job, if we lose her benefits, it could be catastrophic to us financially.

Tristen has since regained his lost hair & his doctors are presently trying to integrate him back into everyday activities such as school and light physical activities, so long as his blood counts allow. We have been buoyed by prayers & support from our friends, family & strangers who find ways to touch our hearts. To be honest, I am scared by what is yet to come, both outcome-wise & financially because this is so alien to us, I am sad that hearing my son cry about a needle or taking medicine has become so common place. Tristen & his lovable personality was much different during the last months, as the steroids & chemo took their toll on him. Presently he is much closer to what he was before, but everyone tells me that he will soon develop into a young adult well ahead of his years due to this battle as this phase tends to do to most children. We do our best to keep things normal & routine for him while loving & appreciating every second with him. Luckily they have allowed us to go to Credit Valley Hospital which is very close to us, to monitor regular things. This is now our satellite hospital since the summer, allowing us a welcomed shorter commute.

The latest challenge face presently is the reaction he is having to his chemotherapy. All of his fingers, toes and lips are all burned because of the chemicals. The risk of infection is very high and we do our best to monitor the situation. We are presently consulting his oncologist & the team at Sick Kids to perhaps make adjustments to his protocol.

Thank you for taking your time to read, we appreciate your thoughts & prayers at this time as we are still finding our way through this.